So my laptop, he broke today. (why are things usually deemed a she?) There’s been dirt under the screen since I got the computer back from the repair guys. That was back when I was in LA fishbowling in a furniture store display window and I’ve just let it go until today. A piece of dirt has miraculously grown bigger under the glass so I just couldn’t take it any more.

Today I took out the pocket knife that Rippie gave me down in Goldfield. He thought every man should have one and he was absolutely right and now I use it all the time. Anyway I whipped it out and started prying the glass away from the laptop–I call it a lappy. That’s the term a friend from the past had shared with me and I’ve called it that ever since. Anyway, CRACK! The glass broke.

This Macbook, though, its name is Hugo Ball. Hugo Ball was one of the founders of the Dada movement and my Hugo goes with me everywhere I go. Hugo and I have been together now since 2008. That was the year I became single for awhile.

Between then and now I’ve been a kind of wandering mendicant. We started NadaDada in ’07 and since then I’ve been fishbowling and reflecting on the nature of transience and minimizing–you know, getting rid of stuff. Paring it all down was a big process. We don’t realize how much crap we’re dependent upon until the rug is pulled out from under us. Without a studio I didn’t do any painting until I got to Goldfield. Between burying cars, I made some canvases and did alot of writing.

It’s actually the second Mac lappy I’ve had. The first one became the property of someone else–someone I don’t know, but someone I hate. It seems while drinking and wandering bars downtown Las Vegas, I wandered into the Beauty Bar (cute name right?) and it seems I wandered out whilst my lappy stayed behind for a bit. Upon getting my drink at the next bar down the street, The Griffin–and I remember this moment crystal clear–in a flash I realized my accomplice Tristan Tzara (Tristan Tzara was another of the founders of the Dada Movement) was not with me. I dashed down the sidewalk full stride back to the Beauty Bar and, guess what, nobody saw it. It was gone. Poof! Pretty much brand new silver Apple laptop.

Mind you I was drunk and the night that followed became QUITE adventurous in the ghetto of downtown Las Vegas; I won’t get into it. Some other time perhaps. Yes, I quit drinking eventually.

So Tristan wasn’t with me very long, though he was at the first NadaDada in 2007, right beside me, playing music while I drew in my room at the Cortez. With his descendent Hugo I made hundreds of videos, thousands of friends online and have streamed thousands of hours of footage. This is fishbowling. I don’t think it’s out of the question to expect that Apple might like to sponsor my endeavors.

This year for NadaDada I’m working on getting a sponsor to build me a glass box to fishbowl in. I’d love to get some solar power for it as well.

Anyway, today got me thinking about all these experiences I’ve been through with Hugo (and Tristan)..

and all the places that we that did go

All the people that we did know.

The article I wrote in the fishbowl for the Reno News & Review years ago.. 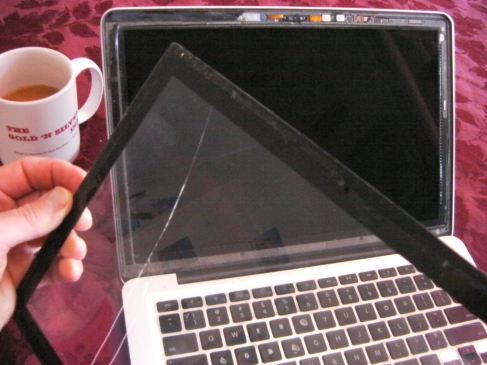 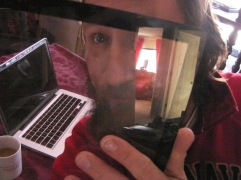 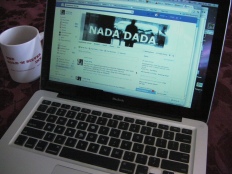 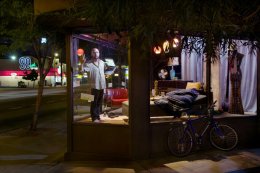 2007, Hotel El Cortez, the first year of NadaDada in my room, drawing on wood 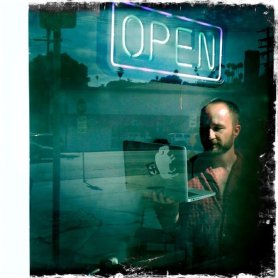 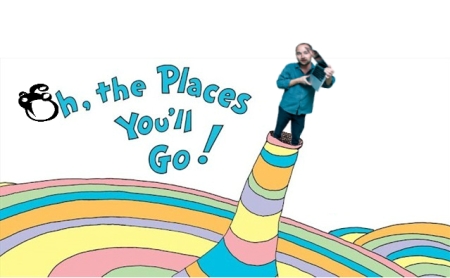 This dispatch is from McDonald’s in one of the North Valleys, just off the highway.

The notion of sustainability, these days, involves a rejection of the huge systems that run everything. It’s an anti-corporatism creed. Globalization is a real thing: an objective, a directive, and it’s the game plan that our current First World system follows. We’re all familiar.

I did not come to write this at McDonald’s to be ironic; I came to lunch on a Big Mac. My “value meal” cost me $7.00 and the coke tastes nothing like Coke. There is an effeminate Hispanic teenager behind the counter who proudly greets with “Welcome to McDonald’s” the millisecond customers cross the threshold & this is crackin’ me up. He’s just happy to have a job, “Welcome to McDonald’s”.

We compromise. For time, for ease, for the bottom-line, we compromise. Toward small business owners & those–like me–self employed, we are to feel repentant for coming to a food chain like Mickie D’s. But I ask: Where else do I get to see the snide mechanical faces in front of Fox News cameras informing me of the patriotic acts of Americans in the face of Terrorism? “Welcome to McDonald’s.” This is what I’m being fed.

I did a quick window job this morning for a Facebook friend who lives a valley over. He had read my last blog post–”about a buck a window per side”–plus he’s been following my exploits online since I was fishbowling in LA so we had alot to talk about. He does politics locally, Neighborhood Advisory Board, plus he ran for City Council last time around–maybe the time before that as well.

Ed Hawkins is his name; you’d like him–ex-Marine, a grandfather. We got caught up on the state of Goldfield and my own little foray into politics, my stint as Chamber of Commerce President down there. We then traded small town stories. As I’ve said it before: Fuck Goldfield. It has that effect on ya’.

So yeah this globalizing system of Facebook is what brought us together. Here I am thinking local, walking the neighborhood with flyers, workin’ the follow ups and it’s been my online connections that have paid off better–for 3 weeks now! I do believe it’s time, though, to set a minimum price for windows, $40 sounds good.

Radical ANYthing is good, and I’m thinking of radical non-possession. This art is not mine or his or yours. I’ve stolen everything I’ve ever done. It’s not mine.

We give it away, bloggers & graffiti artists. I’m inspired by tagging. Give something remarkable. Vandals will be a part whether I like it or not so why not like it? I just hope they’re a good artist.

In LA one time, I came across this place with a huge inflated plastic sculpture. I stopped by to inquire about fishbowling from inside of it.. woulda’ been nice.. somewhere inflatable.. I gotta’ call them..

I’m seeing in Red Yellow & Blue right now. I just came from the spray can and I’ve got spraypainter eyes on right now. I love when it tries to cross between arts or cross between senses. I’m seeing the world as a sprayed painting. Synesthesia of some kind: circle is red. I’ve been doing some drawing to excavate these renderings  from my head.

I’ve worked hard to make this my life, this mixing of colors, etc. Synesthesia. This shit has to matter to somebody and we are that somebody; people like us, reading this shit.

Do you look at your life and ask “does this really matter?” Well, that’s everybody. Everyone does that. Does it really matter that I’m doing this and not that? Who cares about it? Who’s my audience?

Who am I hurting by doing this? Who benefits from what I do? What am I destroying by working this angle?

Painting junk cars in the middle of the desert sits pretty well with me. And then I write about it. To write about what I’m seeing is one thing, maybe not the best fit, but to write about what I feel: that’s divine. We’re certainly hurting no one and we definitely know that what we’re doing doesn’t matter. We’re changing nothing but maybe that’s it, that’s the Holy Grail, to change nothing. To disturb nothing? That’s not easy to do. We have motivations that tell us we should be doing something.

A Buddhist saying goes like this: Don’t just do something, sit there.

But people will tell us it does matter. We’re bringing joy or inspiration to the world and those words do matter to me, but really.. what does it matter? We’re not insinuating ourselves into people’s daily lives, much, and we’re not changing anything beyond anyone else’s control. There’s no coercion in what we’re doing, but Goldfield will never be the same.

We’re burying cars in the ground and painting them. It’s a monument. Maybe it matters, not at all. I don’t care. There-I’m radical. Maybe I’ll get some sleep now.

Videos, 300 episodes have been made and over17 days of solid streaming. For now, just enjoy a few of the videos here:

This artist has been a big inspiration to me. We’re actually friends on Facebook. I wrote to ask him for a quote one time and he sent back:

“Chad Sorg is the most kickass artist in LA right now!”

His line of creativity is hard to pigeon hole, but I can tell ya, one of his projects involved setting up an “office” and inviting people in to have consultations of some kind. It was complete with a deer head on the paneled wall. It was Texas.

A big thing about him that I like so much is that he doesn’t just make pictures or sculptures or even make a statement. His work borders on a kind of personal journalism. He goes to these places and puts himself in situations and then he writes about it. Each project is different but he puts a task in front of himself and does it, all the while, he writes about the experience.

There’s an ambiguity in what he’s doing because it’s not a straight forward cause that he’s for or against and people don’t know how to take his sincerity. It’s a kind of performance, yet, he’s just being himself… I think.

Often, his actions or happenings result in artifacts after the fact. He does drawings and makes objects, such as the plate seen above.

“You can describe the prank in one sentence. On 27 April 1978, Jeffrey Vallance persuaded a Los Angeles pet cemetery to bury a supermarket frozen chicken in a satin-lined coffin, claiming it was his pet, Blinky. Not a bad joke after all, but for Jeffrey Vallance that became a cornerstone for his carrier and general popularity.”