Photos and essay by Chad Sorg

Some say at the age of 69, Frank Van Zant, aka Chief Rolling Mountain Thunder, had just finishedThunder Mountain Monument at the time of his death in 1989. But it’s hard to say if he considered it done. In fact, it’s not easy to say what it is.

Thunder Mountain Monument, off of I-80 near Imlay somewhere between Reno and Winnemucca, is a folk artenvironment listed in the Nevada Registry of Historic Places. It’s also been designated a National Monument. Butyou might not think to call it a monument, national or otherwise, until you noticed the donation box at the entrance.

“It’s a monument to the American Indian’s struggle” says Dan Van Zant, eldest sonof Chief Thunder in a recent phone interview. “My dad would call it castaway stuff from whiteman’s society. Everything was scavenged within fifty miles.”

“Everything” includes five acres of solid outlandishness; bones, arches, rocks, dead farm equipment,unidentifiable rusties, statuary and structures, and a few cars tipped up to form a “fence” with a wheelbarrel size airplane made of cement hanging above. The site features a main building with smaller buildings organically shaped with rounded corners and odd forms andobjects nestled in walls and surfaces. The big building is three stories tall and looks perhaps what a hermit’smansion might look like.

Who could blame the passers-by, gazing through their car windows at this rocky oddity and asking, “What the hellis that?”

Frank Van Zant, who changed his name to Rolling Mountain Thunder, worked in the tradition of Simon Rodia whocompleted the now famous Watts Towers in L.A.’s Watts district in the mid 50’s, later walking away,literally, from his creation and his land, never to return; or there’s the example of the folk-land environment inSummerville, Georgia, built by the humble Reverend Howard Finster who lived a long and motley life. This guy filled in aswamp, which was his own back yard. Over a long period of years he transformed, and has since left behind, the tiledand refuse-structured angelic “paradise” known as Paradise Garden.

People write books about people like these and thousands, maybe millions of visitors get to see their life’s work.Finster made thousands of paintings on a par with Grandma Moses, but weirder, some of which have now landed invaluable collections. His name will be remembered.

Very often these so called “outsiders” have mental aberrations, such as schizophrenia as it was diagnosedwith Frank Van Zant, who son Dan explains was only 1/4 Oklahoma Creek. With this malady, the “Chief”was still able to lead people in a life at Thunder Mountain in the ’70’s as a meditative commune with drugsstrictly disallowed and residents discouraged from visiting each other’s cabins. Helping to build the monumentwas optional–on a volunteer basis. In years since, these residencies in the canyon have burnt down.

“He owned 120 acres up in the canyon, where Lizard lives now”, Dan said. “I getcalls–or emails these days from people that were inspired by my dad and his fatherly influence, saying itwas the best time of their life, and that he was a positive influence for them.”

A man named Jim was one man apparently moved by the folk art monument. He spotted it along the freeway, came backand wrote Dan a check for $20,000. The gift was in memorial to his step dad, William Schmidt, so Dan installed a bronzeplaque on the grounds. Among other repairs, the money then went to putting on a new roof and fixing vandal damage.Dan also explained that once the work began and the place was cleaned up, vandalism dropped off.

Dan’s work isn’t done. Now 60 years old, he has to find someone or something to take care of the place.

Maybe we can look to the words of Chief Rolling Mountain Thunder himself, “It’s in the hands of the greatspirit.” 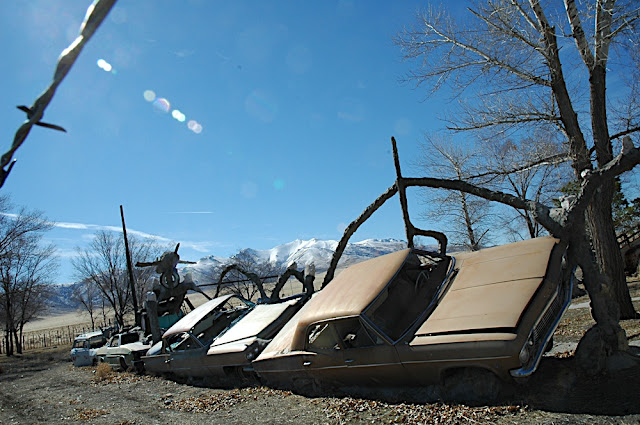 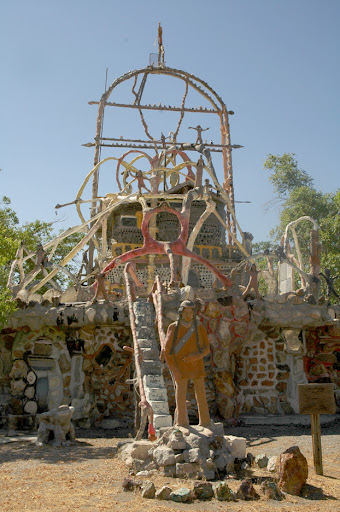 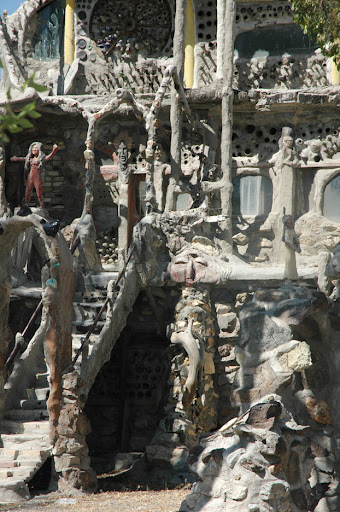 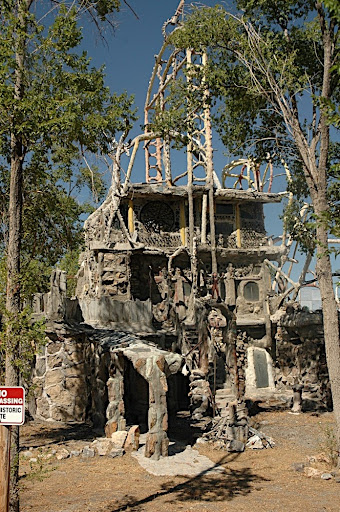 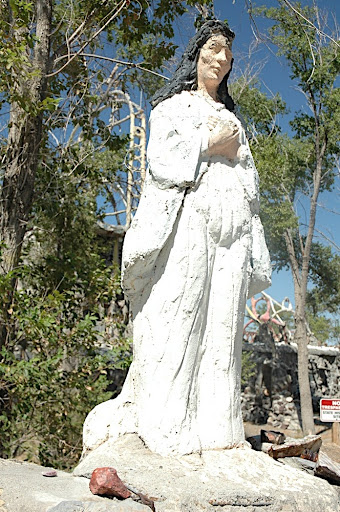 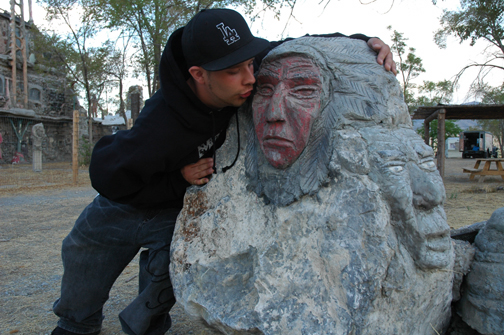 There’s a great radio station here in Goldfield. I realize that’s hard to believe it, but they’ll play all these songs I’ve never heard, such as this 80’s funk song sayin’ “Get funky!” I realize this doesn’t narrow it down much but it’s kinda funny. There’s this primitive rapping in it and ‘kangg-kownnngg, waahhh wahhh’ kinda sounds.

Most of this stuff I never hear on the radio. They don’t have to make money on the songs anymore so they’re not played. Banjo, Willie, Patsy and Johnny Cash, but then a lot of really funky choices are thrown up against Bob Marley or Dylan. The only commercials are these really stupid impersonations of Nixon begging for donations to the station so they can replace their ’62 Dell computer.

Did you ever see Vanishing Point? It was made in the very early 70’s and featured a radio DJ that broadcast from the Goldfield Hotel. The hotel has not changed one bit and I don’t think the rest of the town has either. It’s a car movie and touted as having some of the best chase scenes in the history of cinema. It’s a classic, watch it some time.

It’s nice sitting here right now. I’m at the car forest. I came to visit some cars and see where I wanna’ go with them. I was able to the cars and kick some dirt off their windshields & pick up scraps a bit. I even got to spray a bit of color. I have some great metallic and basically every color I could want. We’ve got these little mirror pieces to apply to some cars, so I was planning that out a bit too. It won’t be all painting on these cars. I hope to get some great welders here to build shade off of these things too; maybe make a few of them into steel trees, with leaves. I imagine the people camping here in the future under the cars.

Yes, the bus is standing up on end above us on the hill. You can see this thing from EVERYWHERE in town. I know because we drove across town today and I could see it at all times, up on a ridge. The bus is much higher than the tallest building in town. This sleepy village gives me delight; 198 people with mostly run down homes. There’s not much point in keeping things presentable, but they must wonder what the hell Michael Mark’s up to. He likes to allude to people here being scared of him, or at least not sure of his motivations. He considers himself a bit of an outcast. We’ll show them.

Mark is currently running the backhoe and is about to bury aPlymouthstation wagon, bluish white. It’s kinda’ nice lookin’ with its 4 headlights that are round. Body looks pretty good on it. It will be a beautiful canvas for someone. It was my choice where to stand this one up and I suggested we put it on a hill coming into the gully that is the most concentrated area of car forest. This car can also be seen from all over town.

K-Pow is looking great. I got up here in the Suburban just before sunset and at that time it was sprinkling a little bit. It gave the painting a real nice look with water beading up on it. I started with that car when I got to Goldfield a couple weeks ago, and as I predicted, it’s gotten the most attention from me so far. The explosion was painted pretty well, I’d say. The yellows to reds contrast nicely with some purple, blues and black. I used a brush just a little bit to set it off more sharply.

At this point I’ve got around 6 cars I’m making art on so I’m trying to stick to them and not expand my territory. It’s been a very popular invitation to ask my friends if they’d like to have a car to paint. In the dust & sun or snow  wind, at least they’ll have a good station to listen to.

“Yes, The Bus is Standing Up on End” Goldfield Journal #11

Ever been to Goldfield? It’s in the middle of Nevada, and here, we’ll be sharing the story.

Saint Michael Mark is the patron saint here and legend has it an alien came to inhabit his body since the age of 23.

Father Sorg is a wandering monk from the Mysterious Order of NadaDada. This band of nomadic creatives worship in various locations including motels.

Sorg has come to join Michael Mark in his quest to edify the world and call attention to the teachings of Jesus Christ:

“This monument is to the teachings of Christ, not the bullshit from the Bible, etc. but the stuff that’s inside you.
Jesus was the most influential person I’d come across. He seems to touch everyone in this world so i decided to give it a kickstart.
I knew these people came from the stars… from the dust and to the dust. Since I couldn’t get off this stupid fuckin’ planet and away from stupid fucking people, I decided to build a monument to the mind of Christ, the philosopher, the poet, the dreamer. The man who knew what unconditional love means.
He knew that anything was possible if you believe it. A human being can do anything he wants to if he thinks he can. There are no limitations.
If you think there’s a planet out there with two suns, there is. If you think there’s such a thing as flying saucers, there is. If you think you can write a book, you can. If you think you can be an artist, you can. If you truly believe in God, you will find a way to contact him.”

Together, they’re forming the International Car Forest of the Last Church. It will be a place where artists are invited to come and find themselves.

Follow this blog (at right) to stay up to date.

I’m not so clear on how to update this blog every day, so I think I’ll just make some notes here about that and share my thoughts/plans with you right now.

I might as well include some random images too from the Car Forest.

There are a few things for me to be focusing on. I’ve started a journal and, at this moment, I have 10 entries about my new life in the desert. They’re up and online. They’re on Facebook and I will get them onto this blog site soon as well.

What is the point of this project? What am I trying to do? Those two questions will be the subject of future posts.

I’ll also be uploading videos as they’re made. I made one last night that I still have to edit. We buried the bus into the ground and that was extremely exciting.

S0 alas, I’ve got photos to post in cohesive groupings, I can continue to write journal entries (maybe make a book out of it some day), and also do regular ol’ blog posts. In those I can be more brief and impulsive.

It’s incredibly nice to be in this position where all I’m asked to do is make art.

Michael Mark Rippie is the proprietor of this place and I intend to canonize him in the outsider artist pantheon.

The case of that damn blue bus:

We’ve been working on it every couple days for over a week now. We had to drag it out of its location of 20 years and get it up the hill above the car forest.

I gotta’ tell ya’, the vantage point from this bus’ new location is where one can see the whole town and surrounding area. I plan to build a platform up there and we’re installing a ladder once it’s planted.

We work at night with the backhoe. Michael Mark does the driving, pulling, tugging, and I do the chain work, wrapping it around the hooks conveniently located under the crumpled rear bumper. We’re lucky they’re still there, not much else is.